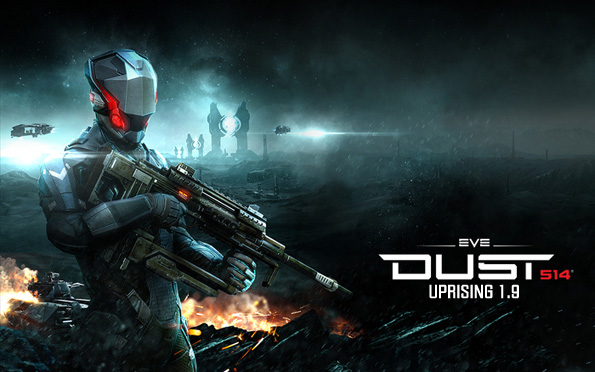 On 4 November, DUST 514® will be updated with the release of Uprising 1.9, which adds a number of features and changes specifically requested by the community. These include:

Here you will find a brief explanation on the biggest upcoming changes, with the full Uprising 1.9 Patch notes found at the end of this post. 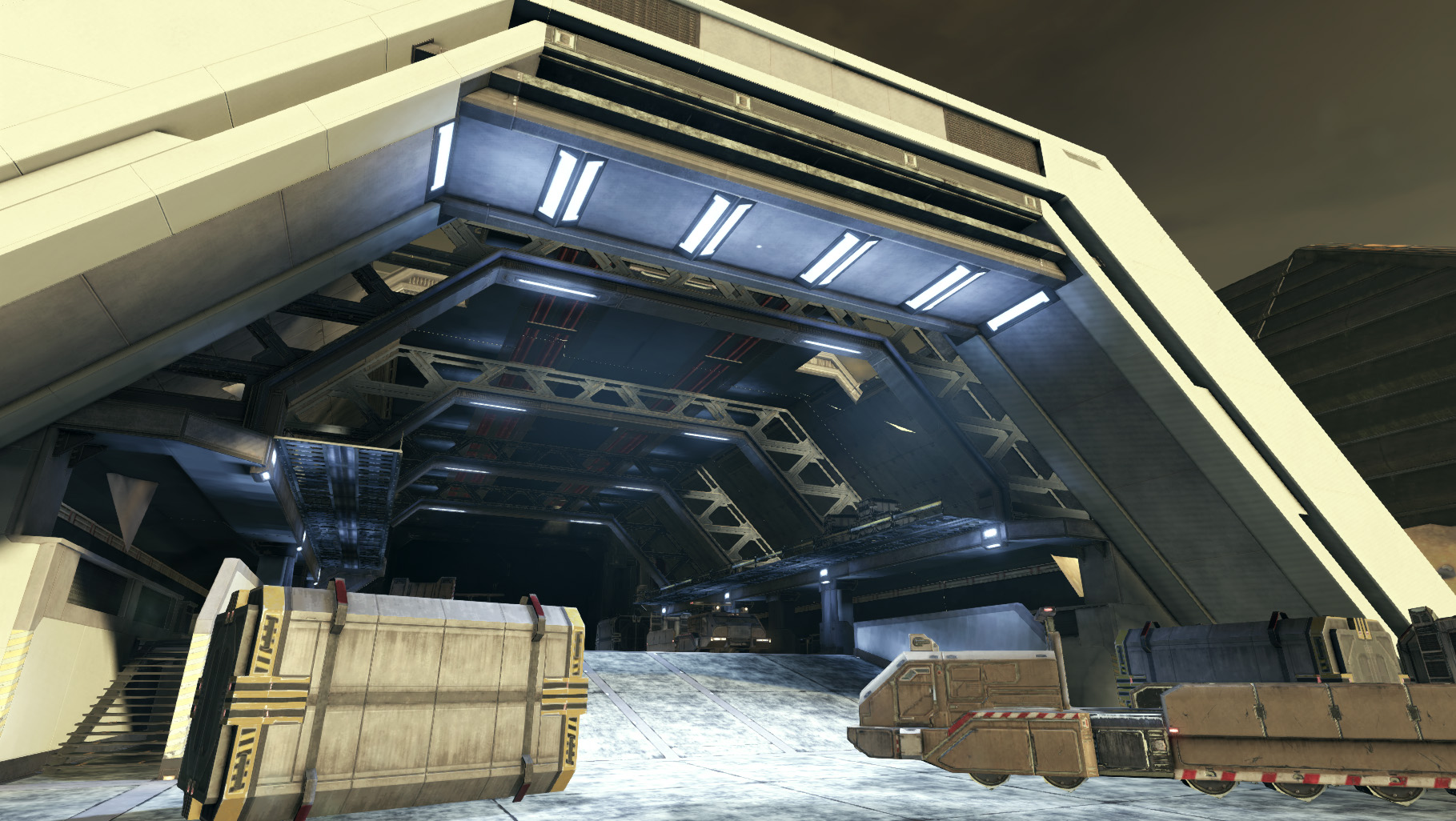 Highlands is a new map set around an underground structure at the end of a railroad track, complete with abandoned carts, containers and other structures. 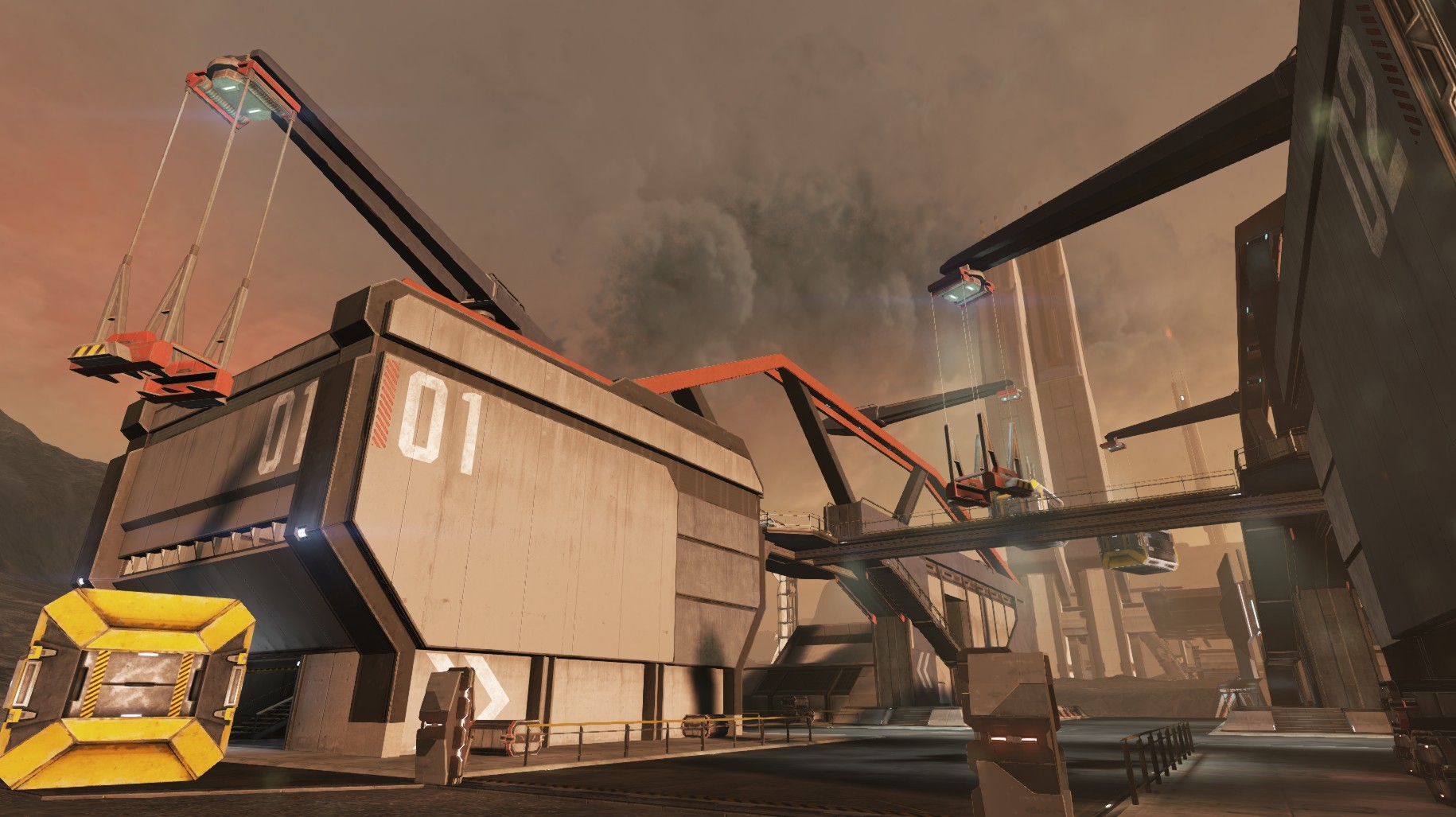 The Production Facility (Large Socket) is a complex structure with multiple levels, creating loads of opportunities for vertical gameplay, with ramps, stairs and plenty of cover.

The Power Core (Medium Socket) is a ground platform of three tall towers surrounding an underground tunnel to a server facility, accessible from the ground elevation by dropping down a vent, or via a road underpass. This setup makes for intense corridor assault and entrenchment. 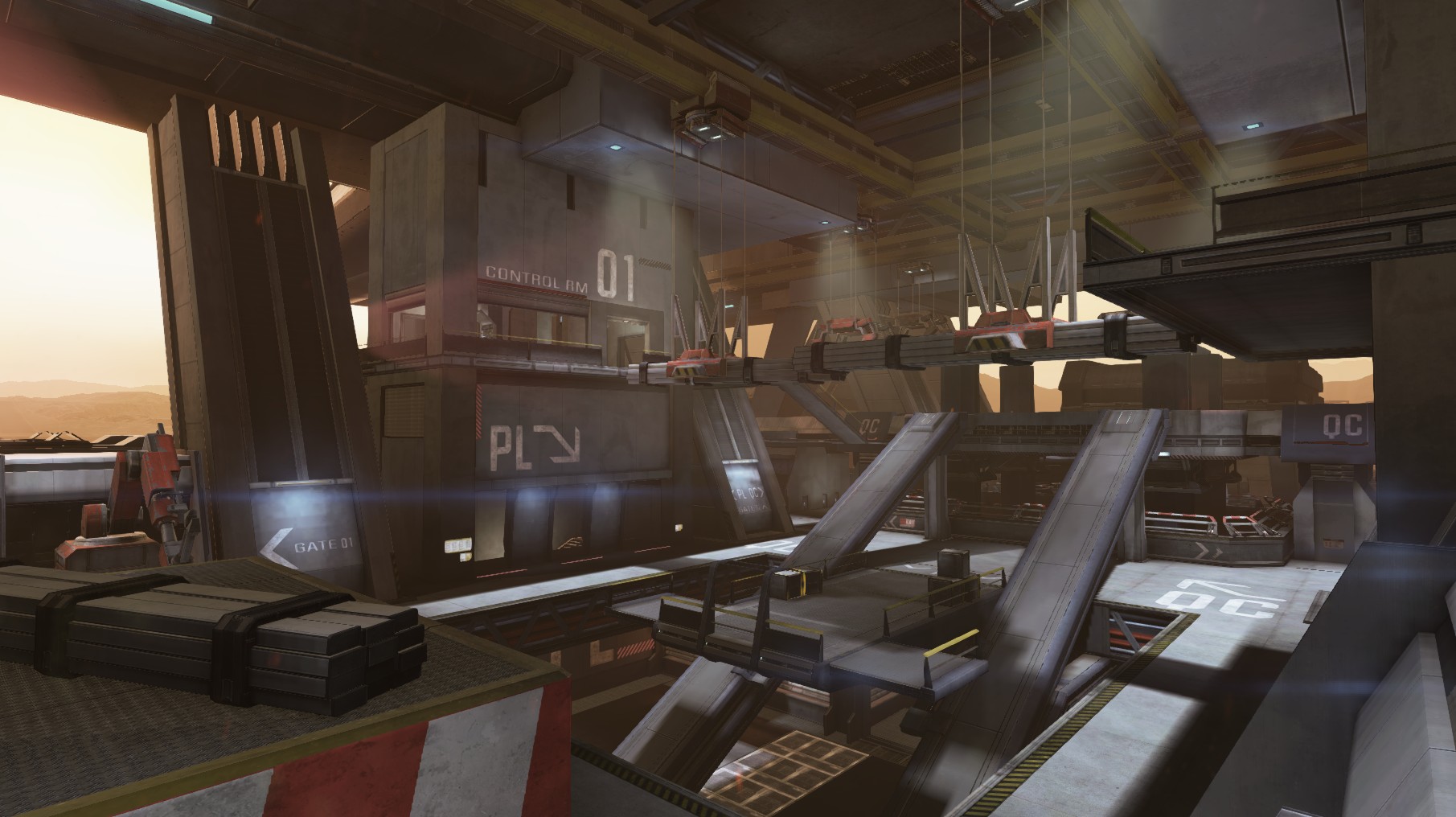 The Barracks (Medium Socket) is a structure of two buildings overseeing a crossroads with a platform and a bridge between the buildings. This socket features frantic interior gameplay and vertical outdoor combat.

Boulder Rim and Spine Reactor are new Battlegrounds that are using the Production Facility Large Socket and random Medium and Small Sockets. Isolation is a new type of map we are experimenting with. In short, it is the Production Facility in a much smaller new map with one Medium Socket on either side. This Battleground should be frantic and fun, for both Ambush and Domination game modes. 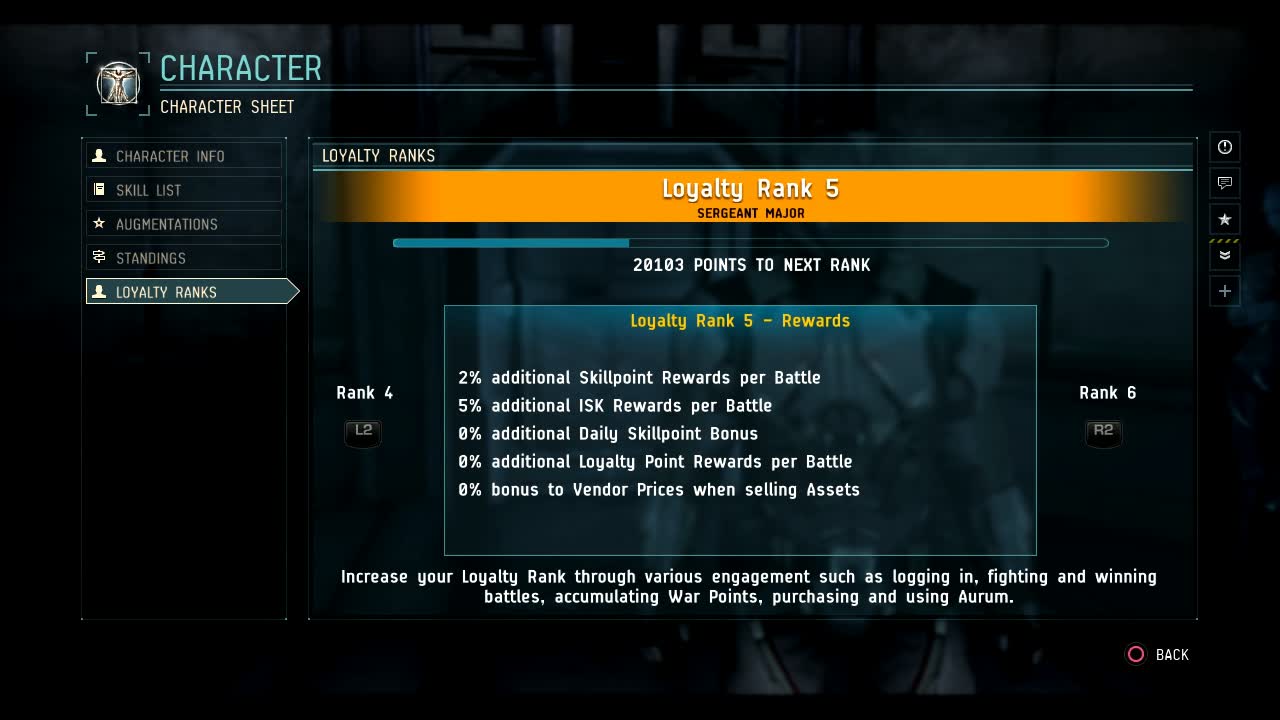 We are happy to announce the Loyalty Ranks feature, accessible from the Character Info option in the NEOCOM. With Uprising 1.9, your Character will gain a Loyalty Rank based on your Lifetime Battles, Wins, War Points and Aurum spen t. For veteran players, the ranks are effective immediately, based on each player’s lifetime statistics. Each rank will grant an Honorary Title and specific bonuses to in-game rewards such as End-of-Match Skill Points, ISK rewards, and more. Higher ranks will have higher bonuses and unlock new ones.

With this update, we also introduced two brand new unique moods to our maps – Toxic and Stormy, which will change feel of both existing and new maps. 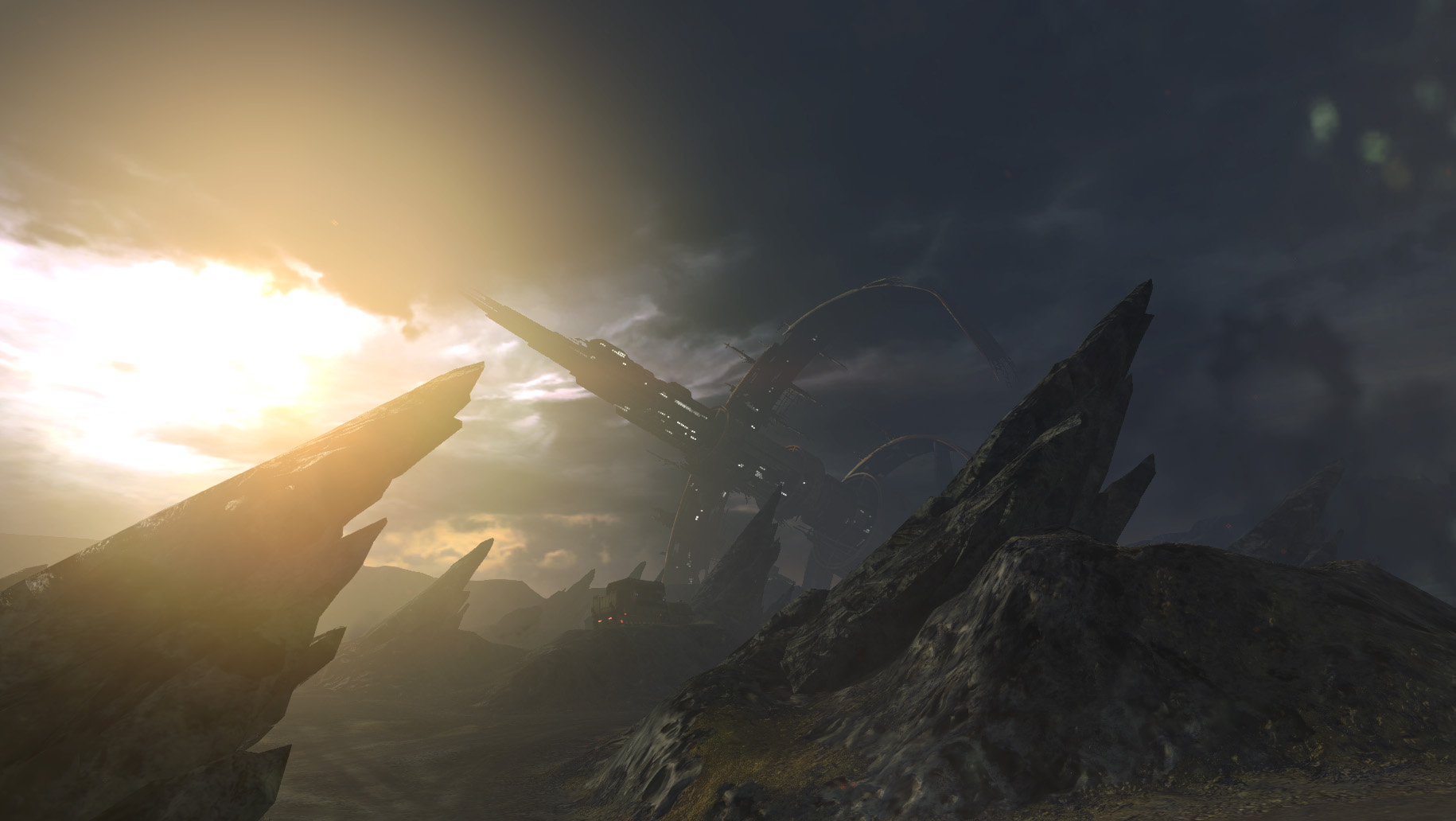 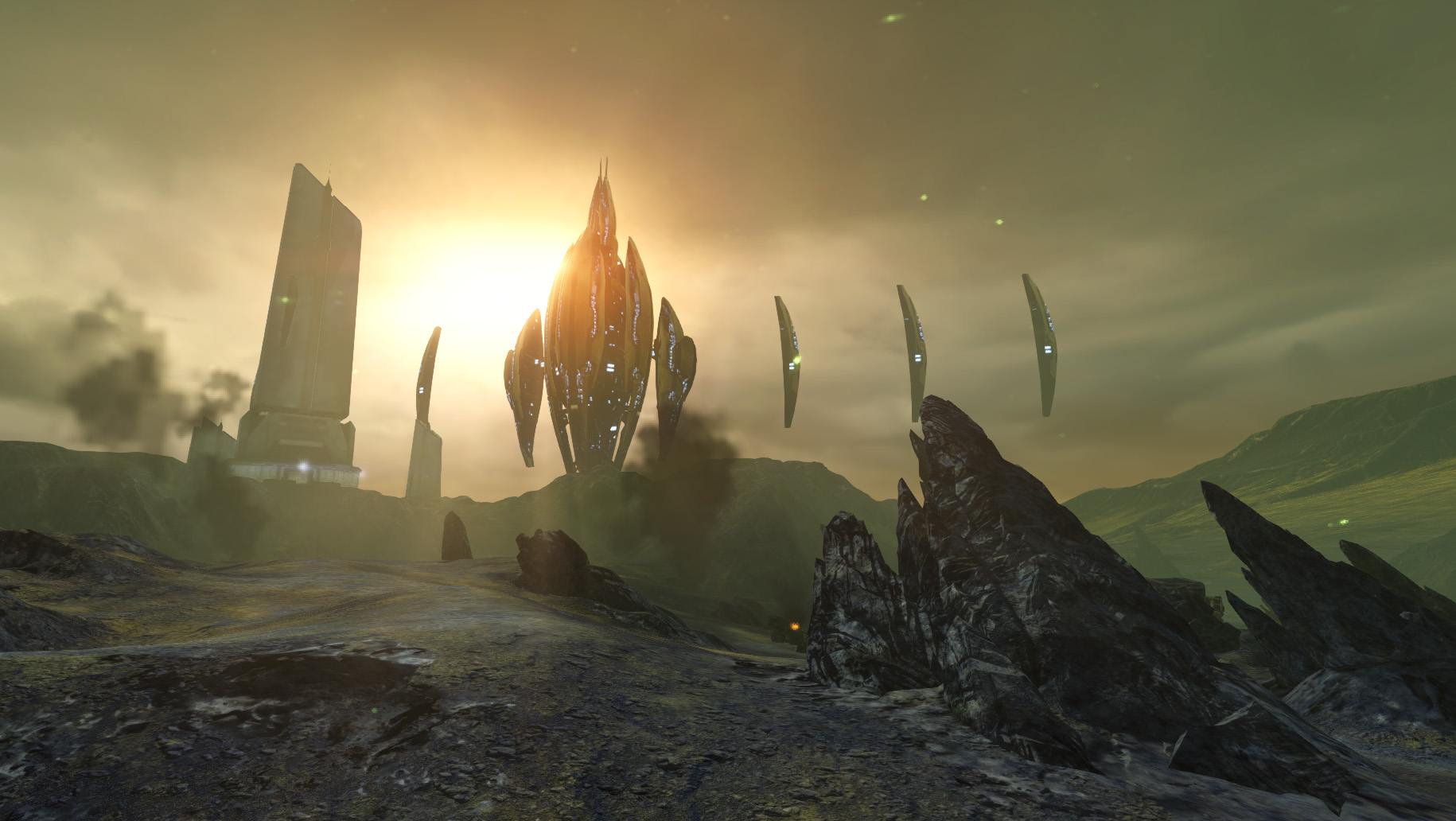 SELL TO VENDOR AND MARKET AGENT

We are pleased to announce the inclusion of this new feature that so many players have asked for. Many need the ISK while quite a few just want to clear out assets that they have progressed beyond. The base vendor price will be 20% of the market price. Loyalty Ranks will, however, give bonuses to the vendor price up to another 15%, to a total of 35%. TheMarket Agent, which is a new feature under Services in the Marketplace, will grant another 15% if bought for AUR, allowing a maximum Vendor Price of 50% of market price. We have also added an Asset Terminal in the Mercenary Quarters that gets replaced by a hologram of the Market Agent if bought.

A note of warning since you will be able to sell AUR items (except for Boosters) for ISK, including BPOs. BPOs will, however, be priced relative to the market ISK price of the BPO item. We believe that this will not unsettle the ISK economy because burning through ISK is quite easy: just go fight a few battles in your favorite prototype gear, even in Factional Warfare, and see that you probably need all the ISK you can lay your hands on.

We want to take the opportunity and mention, before you sell all your BPOs, that we may start offering a number of direct Customer Services, one of them being the trading of BPOs between characters on the same account. At first this will be done manually by CCP employees, based on a special ticket queue. These new services will be announced formally in the near future, but please keep that information in mind before you sell all your assets. Given what may happen, it might be prudent to store that Officer Gear for now.

We have added two quick buttons: Square for Instant Battles, that places you directly into a Public Contracts Battle, and Triangle that takes you directly to the Marketplace.

We will be changing the formula that calculates Skill Points earned in Battle, effectivelydoubling the Skill Points earned per War Point, further rewarding players who put in their best efforts. To accommodate these changes, and also responding to player requests, we will also be raising the Weekly Skill Cap to 750,000 Skill Points.

All Boosters (including Passive, Active and Faction Boosters) can now be stacked up to three for cumulative effect. This will be a great option for new players who want to catch up with the veteran players, as well as veteran players going hard to achieve Level 5 skills, or getting more of those Loyalty Points you need. Additionally, we will be adding Instant Boosters to the End of Match screen. If you forgot to activate your Active Booster and had a great battle, you can still boost your earned Skill Points.

An option to reset your Skills and refund your Skill Points will now be sold as a player convenience service for AUR under the Services Market category. We believe that this is the best way forward for DUST 514. If you need to fix a few bad decisions, then this is the option for you. Players who want to continuously reset their Skills will be able to do so, which pushes on the Development team and Community to keep the game as balanced as possible. A note of warning, though: Skillbooks will be refunded at 80% of the ISK Market Price with the Skillpoints, so will need to be purchased again for ISK, every time you Reset and Refund your Skills.

We have implemented some Rendering Optimizations to increase overall frame-rate and will be monitoring the effects thoroughly over the following weeks.

The sprint bug, where players would experience a slow down immediately after using equipment, has been fixed.

We have optimized a few of the Particle Effects in an attempt to eliminate the bug where Swarm Missiles are not rendered to the Dropship Pilot, i.e. the invisible missiles bug.

We have increased Infantry awareness of Vehicles by adding a new sensory Vehicle-only radius, much like Passive Scans. Our hope is that this will allow fewer HAV’s to sneak up on unsuspecting Infantry and help with countering LAV drive-bys. Increased awareness of other Dropship pilots should make Dropship ramming easier to counter as well.

The use of Passive Scans together with Cloak Fields is a potent combination, and we will be addressing this by adding a feature to the Cloak Field. While it is active, the Signature Profile is reduced as before, but also with a much reduced Signature Radius. This means that a player with a Cloak will have to choose between providing scans to their squad or being more difficult to scan and locate. Another potent combination is the Cloak Field and Alpha damage weapons. We will be adding a put-down-delay to the Cloak Field (all equipment will be able to be given a delay, but the Cloak will be the only one for now), meaning it will be impossible to fire a weapon immediately from the cloaked state.

Also, pilots will be able to accumulate War Points for each friendly spawn on the Mobile CRU module. This will be a great addition to the Pilot toolbox and reward the use of the Vehicles as fortified mobile strongholds for teammates to spawn at.

Nanite Injectors can now only be used on Teammates that have requested assistance by pressing the “Call for Help” button. This may seem like a double edged sword to Logistics players, but the recent buff to Nanite Injectors should make it very likely that players will request help. This change is also implemented for players that absolutely do not want to be revived for various reasons. Another buff to Logistics players is that Active Scanners can now share scan results with either Team or Squad. This is set on a per-item basis so we will see more Active Scanner variations in the very near future.

Path to Game and Overall UI

* Multiple tweaks to the following Battlegrounds based on the community feedback:
- Manus Peak: Repositioned Objective B to provide cover from fire.
- Manus Peak: Added cover from all directions to Objective A.
- Manus Peak: Added Spawn Points for both teams.
- Ashland: Supply Depot moved from J10 to I10.
- Border Gulch: Cover and additional Spawn Points added to provide counter attack opportunities and reduce travel distance to the map center.
- Line Harvest: Medium socket enabled as a new default Spawn Point in C4.
- Line Harvest: Supply Depot added to E9.
- Line Harvest: Added surrounding cover to Objective.
- Spine Crescent: New variation using the Consolidation Matrix and Communication Outpost.
- Fracture Road: Moved Objective.
- Fracture Road: Changed both MCC locations to allow both teams to jump on to the pipes from the MCC.
- Fracture Road: Added a Spawn Point to each team to reduce travel distance and equalize the team distances from Objective.
- Impact Ridge: MCC moved closer to the middle of the map and added new Spawn Points to reduce travel distance.

* Added an Instant Skill Point Boost option to the End of Match screen.

* Optimized Particle Effect for swarm missiles in order to address "invisible missile" bug.
* Fixed star flickering bug on the login screen.
* Polished the Ion Pistol reload animation.
* Fixed and issue where sprinting after firing would cause the player to run slower.
* An Active Cloak now also reduces the player's Passive Scan Radius by 85% in addition to Signature Profile.
* Vehicle Icons will be visible to players on the Mini Map and Overhead Map at a longer range (up to 80 meters) than their dropsuits Passive Scan Radius.
* Switching between Cloak and Weapon will now have a longer delay (0.33 seconds).
* Nanite Injectors can now only be used on Teammates that have requested assistance by pressing the "Call for Help" button.
* Spawns on a Mobile CRU will now grant War Points to the Pilot.
* Active Scanners can now share Scan Results with either Team or Squad. This is set on a per item basis but all Active Scanners now have Share Results with Team as default.

* Added two new categories to DUST Marketplace:
- Visual Customization.
- Services.
* All Vehicle Turrets are now under the Vehicles category.
* Moved the Packaged Fits Category into the Bundles Category.
* Sell to Vendor option added to Assets and Mercenary Quarters. All items, including AUR and items (except Boosters), can now be sold for ISK.
* A New Agent is available for purchase for Aurum. The Agent is displayed in the Mercenary Quarters, providing better selling offers from Vendors.

* Added Skill Reset and Refund option to marketplace for player convenience, purchasable for Aurum. Skillbooks are refunded at 80% of ISK Market Price.
* Introducing a new Loyalty Ranks program, where Players will gain a Loyalty Rank based on Lifetime Battles, Wins, War Points and Aurum purchased and used, and more. For veteran Players, the Ranks are effective immediately, based on each Players lifetime statistics. Each Rank grants an Honorary Title and specific bonuses to in-game rewards such as End-of-Match Skill Points, ISK Rewards, Loyalty Points, Sell-to-Vendor Prices, and more. Higher Ranks have higher bonuses and unlock new ones.